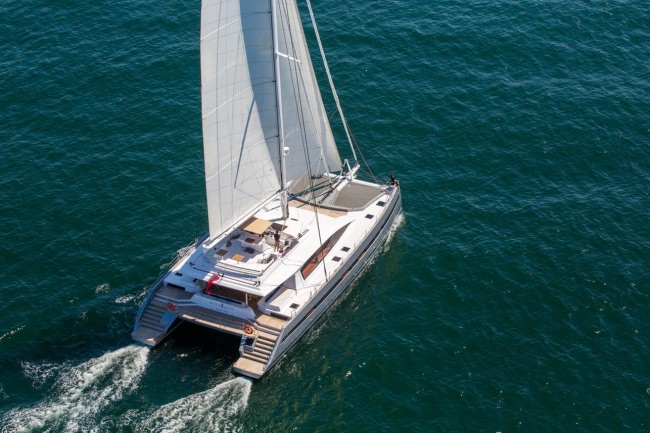 Captain Drew Meyers: American
Drew has worked in the yachting industry for the last 12 years and is excited to welcome you to WindQuest! He has been captain of WindQuest for 5 years. His contagious enthusiasm and intimate knowledge of the Caribbean islands help create a one-of-a-kind charter experience. Growing up in New England Drew was always around the water, however it was not until college that he discovered the world of yachting. He took a year off University and sailed with three friends from Cape Cod to St Maarten. It was during this adventure Drew discovered his passion for the ocean and decided to turn it into a career. After finishing his degree in Business Finance, Drew returned to the water and has remained on yachts ever since and was the captain of the very successful charter cat Matau. Drew holds a Master of Yachts 200 Ton license and is working toward his 500 Ton license. He is constantly trying to challenge himself and recently completed a 1500 NM trip using celestial navigation! Drew is an avid underwater explorer and is PADI rescue diver certified. Drew’s skills are not limited to water and wind, just ask him for his famous chocolate fudge sauce and find out!

Chef Robin Thompson
Robin was born in N.Ireland where he grew up on his family’s farm before heading to England to attend university. Thirsty for adventure Robin joined his sister in Boston and sailed to the Caribbean. Once there he began work aboard one of the world’s largest sailing trimarans where he worked for three years, progressing from steward to cook. A chance meeting with another Captain soon brought him into the world of catamarans and gave him a chance to hone his cooking skills. After a year onboard Robin returned to Ireland to enroll in cooking school and acquired his Chef’s certification back in 2008.
Returning to a life at sea, but this time on a new yacht, Robin grew his charter experience and his passion for both food and service. He also met, and began working under, Captain Drew Meyers. Drew and Robin have now worked together for 8 years and love being able to show you WindQuest has to offer. Robin relishes the chance to present you his food with style and flair and can’t wait to welcome you aboard to start your dream vacation.

Mate Ryan Beutler: American
Ryan joined the Crew of WindQuest in May, 2016. He grew up in Connecticut, learning to sail at a young age and spending many days doing so on the Long Island Sound. In fact his dad insisted on having him at least sit on the families 22-foot sailboat the day out of the hospital. With a strong desire to spend time on the water he spent the summer months while at university working as the crew aboard a 50 foot Alden sailboat with day charters and trips to Martha’s Vineyard and Nantucket. After completing his degree in Marine Affairs from the University of Rhode Island, Ryan joined the crew of WindQuest. Since then he has sailed extensively with the crew, from British Columbia to the Caribbean. He is Open Water Dive Certified and currently working towards his Master of Yachts 200 Ton License. With a strong love for the outdoors, the ocean, and sailing mixed with youthful personality and energy, Ryan hopes to help provide a delightful charter experience.

Steward Sean De Klerk: South African
Passionate about service and a life at sea, Sean De Klerk fills the position of steward on board WindQuest. Growing up in Durban, a charming seaside town on the east coast of South Africa, renowned for its sailing culture and also boasting the largest harbour in Africa, his extensive background in fine dining and hospitality, coupled with the maritime ethos of his home town, it was no surprise that Sean was to end up pursuing a career in the luxury yacht industry. His fine dining and hospitality background has equipped him with an extensive knowledge of food, wine and cocktail service as well as a superb attention to detail concerning all things related to housekeeping and guest relations. His warm and charming nature contributes in a unique way to the personable and tailored experience that all guests have on board WindQuest.